Nicky’s Handlebar is a unique place in Phuket: a restaurant-bar-hotel-garage entirely dedicated to big motorbikes. This is the creation of Somnuek ‘Nicky’ Phonkaew. Located on Rat-U-Thit Road in Patong Beach, Nicky’s Handlebar looks like a large orange and metallic grey hangar. To the right side of the entrance is a large corridor-like path leading to the garage and the 27-room hotel; the left-side is the restaurant.

The theme of the place is motorbikes, engines and mechanical parts. The restaurant has 13 wooden refectory-style tables and benches, a long bar with stools made from motorbike seats, an optics shelf shaped like a motorbike, old-style motorbikes hanging from the walls, along with stickers/posters and signs glorifying Harley Davidson and the biker’s way of life. There’s no doubt about it: this is hog heaven for anybody.

With soft rock and blues classics as a musical background, smiling and diligent staff members, five TVs showing sporting events and motor shows such as America’s Trucks, even the traffic on Rat-U-Thit Road right in front of the dining room seems far away.

And the menu is made out of a motorcycle wheel! The waiters do not need to go to a fitness centre, they exercise while working. Nicky’s Handlebar restaurant offers a choice of Thai and Western food: soups, salads, burgers, curries, seafood (prawn and lobster), pizzas, spaghetti , and a choice of desserts ranging from banana split to pineapple fritters (with ice-cream!) to seasonal fruits.

I sampled a New Zealand tenderloin steak with pepper sauce and salad which was perfectly grilled and it melted in my mouth. The drinks menu shows a wide choice of liqueurs, cocktails, with eight brands of beer. One thing’s for sure; you won’t get thirsty at Nicky’s.

Somnuek ‘Nicky’ Phonkaew, the owner of the place, was born in neighbouring Phang Nga Province and has been living in Phuket since 1983. He has worked at many famous places here: from the Phuket Cabana Hotel (now Impiana Cabana) in Patong Beach to the Katathani Resort at Kata Noi to the Club Med in Kata Beach (he was a barman there) before dedicating his life to his passion: big bikes and vintage cars.

He owns 22 Harley Davidsons, two Indian bikes (1920 & 1926), and one Ducati 996; and also owns a few luxury vintage cars: a 1969 Stingray convertible, a 1964 Pontiac GTO convertible, a Ferrari 360 Spider, and a Lamborghini to name a few. The cars are available for rent for weddings and special occasions. Nicky also runs Harley Davidson tours around Phuket (day and overnight tours). He is also one of the main organizers of the Phuket Bike Week held every year in April.

Nicky’s Handlebar is an entire world in itself, and even if you are not a biker, the design and atmosphere of the venue will give you an amusing glimpse of the motorcycling world. Nicky will be happy to take you on a tour of his place, showing the garage where bikes are repaired and the large room where most of them are stored (at least until a special showroom opens on the bypass Road by Phuket Town).

And don’t worry; even if the restaurant’s kitchen is located right next to the garage, the excellent food does not taste like gasoline and oil…

More to discover in this hotel! Take a look... 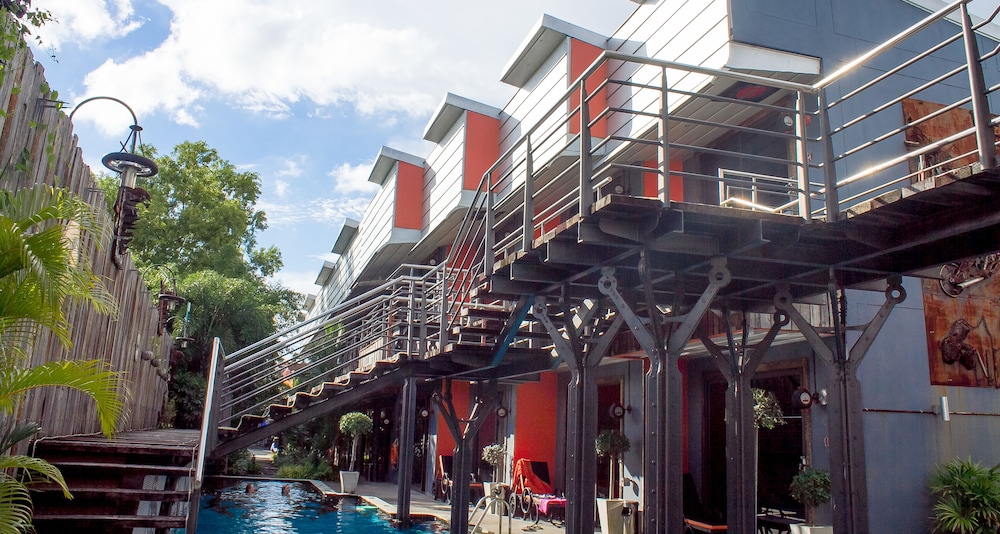 When you stay at Nicky's Handlebar Hotel in Patong, you'll be in the entertainment district, within a 15-minute walk of Patong Beach and Bangla Road.Featured amenities include dry cleaning/laundry services and a 24-hour front desk. Read More...

We try to provide free information that is as up-to-date and accurate as possible. However, if you are planning to travel it's a good idea to double check specific dates and information to avoid surprises.

Choose one of the following to unlock Secret Prices and pay less on selected hotels.